A leading UK construction and infrastructure services company, the Kier group were in need of an extraordinarily large crane with special features for their base at MoD Lyneham. The special features included requiring a high safe working load across a combination of cranes, therefore WH Scott & Son was assigned as Principal Contractor to design, specify, manufacture, install, test and certify two 10t electric overhead travelling cranes within an existing hangar. 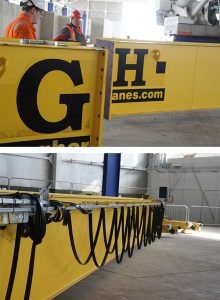 Having worked with WHS in the past on a similar project, the relationship with Kier continued in June 2018 when the latest project began. A live base with activity throughout the day, the WHS engineers had to be mindful of the complex working environment and adhere to strict rules and conditions, including working to set timelines for specific operations.

A 1950s concrete hangar, a ground structural survey was imperative and flooring samples were taken to ensure that it was able to withstand the weight of the structures being designed. A site survey for the crane supporting steelwork was also conducted to guarantee that the custom-made structures were a perfect fit for the crane.

Once the surveys were completed and analysed, the technical department developed the lift plan and RAMs to ensure safe and compliant operations during building, erection and use once fully in operation. Adhering to the complex lift plan and RAMs, the cranes were built up on site and, once the supporting steelwork was installed, the two 10t cranes were erected, tested and commissioned. The project was completed on time and within budget, with no lost time incidents.