Artist Alexandra Carr spent two years dedicated to the making of Solaris Nexum. Her largest commission to date, it is also one of the most technical, detailed and engineered piece she has produced so far as an artist. She says that the mathematics and problem solving aspects of the process are just as important as the conceptual element for her.

Solaris Nexum explores our changing connection to the sun through technological shifts of various ages. Through a double-sided surface of suspended mirrors, Solaris Nexum is a helical structure projected onto catenary arches, allowing continually changing reflections in response to the shifting light.

Carr approaches celestial architecture, advances in optics, and renewable energy as paradigm-shifting technologies, drawing together periods of human history with a potential future for humankind. 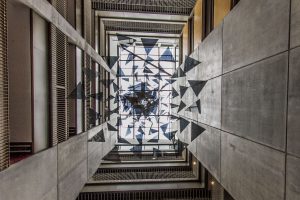 Commissioned by the Grangegorman Development Agency for TU Dublin, WH Scott & Son were assigned to install and load test this spectacular piece of art.

The artwork was to be raised using existing anchor points placed in the ceiling, therefore it was essential to conduct a load test on all three points to ensure they were safe for use. 1,000kg counter balance weights were used for the load test, which were lifted using equipment such as web slings, master rings, shackles and wire rope pulling machines.

Following the successful load tests, the next task was to raise the artwork. Due to access challenges, it was not possible to use a scissor lift to raise the engineers to the appropriate height, therefore WHS teamed up with rope access specialists, Abseil Access and together a three sheave block was fitted to the anchor points with three wire rope pulling machines then connected to the artwork using clevis head components on wire rope with load pins.

As the artwork was in several parts and had to be assembled during the lifting process, the artist was trained by our engineers in how to use a wire rope pulling machine and was supervised during the installation process.

The end product is a fantastic securely assembled piece of artwork, which can be viewed at TU Dublin. For more information on the Solaris Nexum and the artist, Alexandra Carr, check out her social media and website. 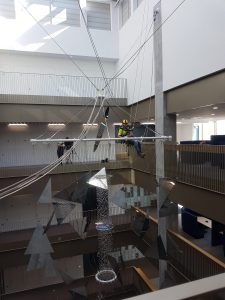 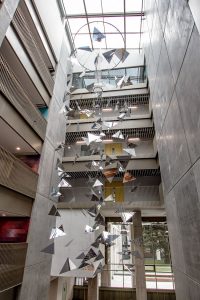 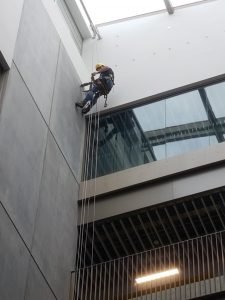